Stapleford – What’s Beneath our Village?

This was the question posed at the Pavilion on 6 October at the talk and presentation of results of the Archaeological Test Pit Excavations carried out in 33 locations in the village between 2013 and 2017.

From the first evidence of a settlement around the ninth century AD to the village we know now, the footprint of the village has scarcely changed from its medieval extent.  There was apparently a large unsettled centre, partly still open as allotments and paddocks, with houses scattered around the periphery.  What has changed is the population: the area that now accommodates about 2000 people used to be home to about 200.  It was the railway in 1845 which first brought about substantial population growth, then in the latter part of the 20th many of the remaining open areas developed as housing.

A presentation by John Street, the instigator of the study, posed a number of questions such as whether the test pitting could help identify the centre of the Anglo-Saxon village.

Finds from the pits provided evidence of pre-historic activity from the Mesolithic period (9,000 – 4,300BC) onwards, with other striking evidence at the nearby Neolithic Causewayed Enclosure and Bowl Barrow at Little Trees Hill on Magog Down, and the Iron Age fort at Wandlebury, both within the boundary of the parish.  Finds of pottery, from local sources eg Ely, St Neots, Hedingham,  and distant parts eg Cologne and spanning the years 850AD onwards,  were in all pits.  Two coins were found; one a Roman minim from the 4thC, the other a 1967 penny.

What was common to all pits was that the layering of finds in the soil did not reflect the passage of time, so in many locations Victorian pottery was found below medieval, indicating the intensity of cultivation in this farming area.  About 2 dozen sherds of Roman pottery were excavated.  Many Roman villas and farmsteads have been located in the neighbourhood, and of course we are near the Via Devana, the route leading to Colchester and mainland Europe beyond. Late Anglo-Saxon pottery (850-1066), High Medieval (AD 1066-1399), Late Medieval (AD1400-1539) and Post Medieval (1540-1799) finds were found across the pits, but not necessarily in all of them. There were many samples of pottery dating from the 19th century and later. Of course many other artefacts were identified; glass from many sources, clay pipe bowl, screws, corroded iron, horseshoes, coal and slate, animal bones, blue plastic golf tee, toy soldier and piece of lego brick, oyster shell, battery core, ‘jacks’ toy, not to mention endless bricks, concrete, button, milk bottle lid, nails and so it goes on.

Could we find archaeological evidence to confirm why the village occurred in this particular location?  The origin of the village is attributed to its position on a river crossing on the possible path of the Icknield Way.  The test pits near today’s river bridge contained some prehistoric flint, but we did not find any more substantial evidence of an early route.  The test-pitting suggests that the village started around the church and in a band from there south down to the river.  Why the church stands on the edge of the village was not elucidated: more investigations in the fields abutting the churchyard to the north might cast some light on this apparent anomaly.  There is no suggestion of a planned village structure.

The study confirms a picture of a relatively peripheral settlement, conveniently positioned between the river and the dry chalky fields, until the nineteenth-century package (railway, mechanically-assisted farming, artificial fertilisers) prompted connections and growth.  The project has also enabled us to see more clearly than previously how the area was used over the millennia, and how the village started 1000 years ago and slowly took shape.

Richard Mortimer followed with a superposition of geology and test pit sites. Stapleford is sited on a chalk bed protruding into the alluvial and river terrace deposits bordering the River Granta.  The earlier finds were located in pits sited on the higher chalk bed and river terrace.

Apparently Middle Saxon finds are quite rare, and he was not surprised that none had been found.  Extrapolating data from our sites and known statistics, he projected that we had very many more sites to dig to find one in Stapleford.  This leaves us with the question – who is going to dig these test pits and take the project into the future to find more about our past?

The full report can be accessed via http://historysociety.staplefordvillage.org.uk/ 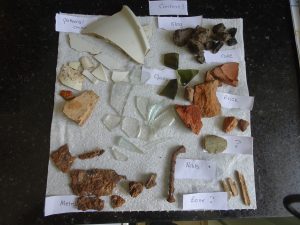